All sorts of medications get sold for allergies, most now over-the-counter.  The following ones are the best:

1.  Histamine-2 Receptor Blockers (H2RBs) — Antihistamines that you only have to take one time a day, & don’t make you sleepy.  Generic (& some brand®) names include loratadine (Clariten®), cetirizine (Zyrtec®), & fexofenadine (Allegra®).  They can be used for any kind of allergy (nose, skin, eyes).  Others like diphenhydramine (Benadryl®) have to be taken many times a day & cause drowsiness.

2.  For Allergic Rhinitis (in the nose), the most effective medication is a corticosteroid nasal sprays (completely different from the performance-enhancing anabolic steroids banned in sports).  Some names include fluticasone (Flonase®), mometasone (Nasonex®), & triamcinolone (Nasacort®).  Anyone taking certain HIV medications will need to be very careful about using these.  Never use the kind of nasal spray or drops that cut off circulation, like Afrin®, Neo-Synephrine®, etc.

But nasal steroid sprays won’t work if you don’t use them right  —  hold the bottle straight upright & bend your head forward.  Package directions are sometimes wrong.  NEVER use it like this: 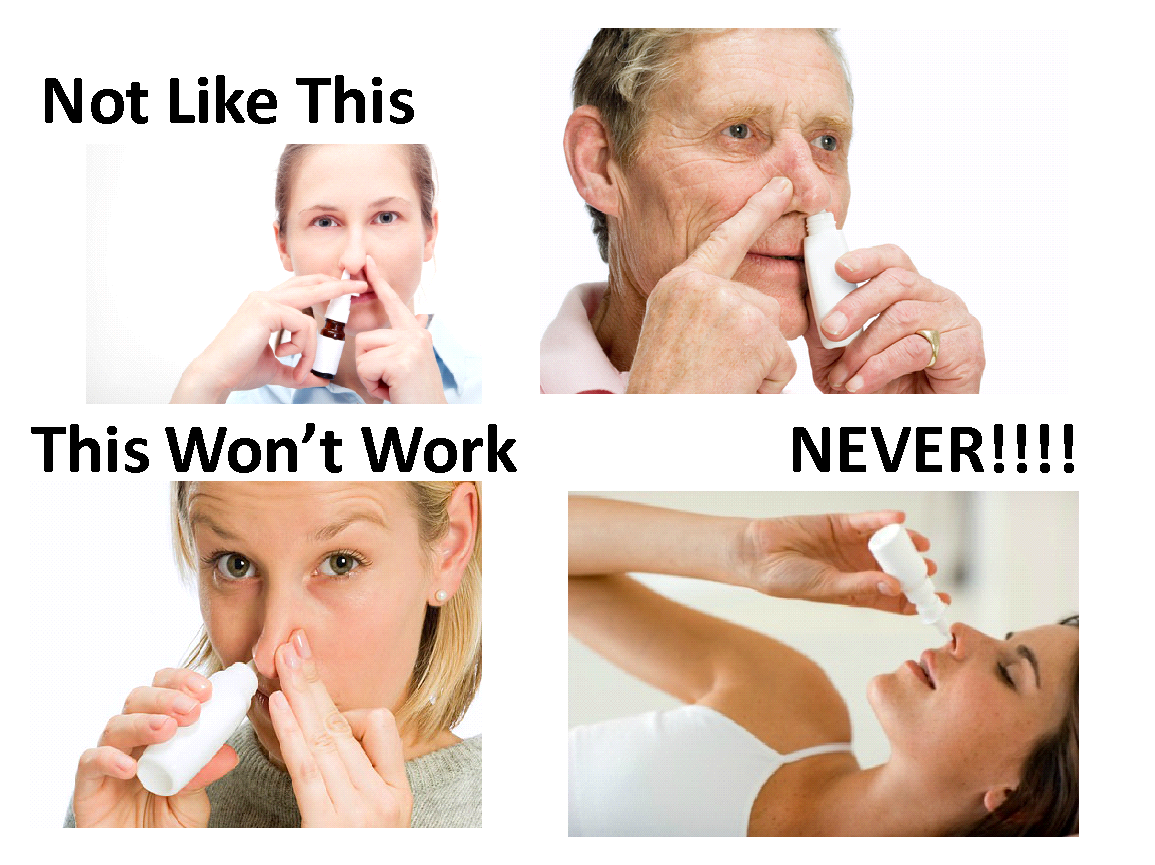 That’s because the mist has to follow the nasal passage, NOT the bridge of the nose.  But you have to hold the bottle straight up, or the tiny straw inside won’t suck up the medicine.  You also have to be sure to:

3.  Eye drops for eye allergies:  Only antihistamines should be used; you can ask the pharmacist which are over-the-counter (ketotifen is one).  Don’t use the kind that “get rid of redness,’ because they do so by cutting off circulation to the eye, which shouldn’t be healthy, & don’t serve to counteract allergies.  Don’t waste money on saline drops or lubricants (“refresheners”), which only stay in the eye for 15 minutes & are no better than tap water.

Oral antihistamines (see #1 above) work very well for eye allergies.  So might a prescription eye drop called cromolyn.  In poor countries you can buy steroid eye drops over-the-counter — but DON’T.  In the long run they can cause cataracts & glaucoma.  In the sort-term, if there’s any Herpes virus hiding in the eye, steroids will make it active, causing permanent blindness.